How the Tourne was Saved 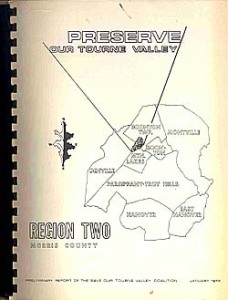 In the late 1960’s the quality of the Rockaway River below the Jersey City Reservoir began to deteriorate badly.  In those days, responsibility for management of that section of the river belonged to Jersey City.  Unfortunately they appeared to have little interest in the river and during the summer drew so little water out of the river to keep their reservoir high that the flow slowed to a trickle.

What made matters worse, because of the lack of a modern sewer system, the “trickle” was often brown and disgusting!  The odor in Lake Hiawatha was frequently repugnant and it was often said apocryphally that it caused the paint to peel from the doors.

Complaints to Jersey City were to no avail.  Finally recourse was sought in the courts.  After several years of litigation, the courts found for the plaintiffs and responsibility for management of the river was removed from Jersey City and given to a new entity, the Rockaway Valley Regional Sewer Authority (RVRSA).  The RVRSA became responsible for the entire 130 sq. mi. of the Rockaway River watershed.

RVRSA immediately began working on a plan to build a large new modern sewage treatment plant below the Jersey City Reservoir.  A gravity interceptor running from Wharton and serving all of Rockaway Valley would collect sewage to be treated at the single proposed plant.  However, it began to dawn on them that the upgrade would be extremely costly.  Where would the funding come from?  It was decided to apply for grants from the state and federal governments.

The RVRSA determined that grant proposals were looked on most favorably in those days if there were a “creative” element in them.  The planners began searching for a way to make their plan more “creative”.  It was then the planning office hit upon a solution.

Why not propose a pumped storage reservoir upriver from the Jersey City Reservoir?  It could be filled in the rainy season and pumped back out into the Rockaway River during the summer when the flow was low and the downstream cities needed water.  Thus, the river flow in the lower Rockaway could be augmented and more easily managed.

The Tourne area would be perfect for it they felt.  It was low-lying and could easily be dammed to construct the reservoir.  After all, it was argued, what good is that useless “swamp” anyway?

This idea was not exactly new.  Something like it had been in Morris County Master Plan Water Supply Element for several years.  The County’s idea was to divert water from the Upper Rockaway during the times when the Jersey City Reservoir was full and water was flowing over the dam.  It would have added somewhat to the overall County water supply but would have done nothing positive for the Lower Rockaway except to diminish peak flows and possibly reduce the likelihood of flooding.

The RVRSA decided to resurrect and expand this idea for their purposes.  They engaged the services of Killam Associates, a local civil engineering firm, to do a planning study and develop a concrete proposal.

The plan proposed by Killam involved two huge dams and one smaller one.  One, a 60-foot behemoth near the tip of Birchwood Lake, the second, a still larger 70-foot main dam from the base of Tourne Mountain, past the ball fields and picnic area, past the bridge over Rigby’s Brook, to the hillside below Rock Lane in Boonton Township.  Finally, a smaller dam would be located north of Arden Road near Old Boonton Road  The ENTIRE area from just below Crestview Road to Old Boonton Road  in Denville would be an 80-foot deep lake totaling 190 acres.  The area included parts of Mountain Lakes, Denville, and Boonton Township.

What was even more interesting was the plan for filling the reservoir and drawing it down.  Killam proposed that a large aqueduct be constructed from the Jersey City Reservoir to the Tourne reservoir.  The Tourne reservoir would have been 350 feet higher than the Jersey City Reservoir so during the draw-down periods, gravity could be used to move the water through the aqueduct.  However, to fill the Tourne reservoir, giant pumps would be installed near the sewerage treatment plant to pump literally billions of gallons of water 2½ miles and 350 feet up through the aqueduct.

The RVRSA did not really try to hide the plan but did not attempt to publicize it widely either.  A low-key hearing was scheduled in Boonton on September 25, 1973.  Luckily, an alert Mountain Lakes resident, Josie Uhrig, noticed the newspaper announcement of the hearing and raised the alarm.

A number of people in the community were appalled.  A committee was formed consisting of residents of the three affected towns and others.  Calling themselves the Save Our Tourne Valley Coalition, the committee went to work to study the proposal, analyze its weaknesses, and prepare counter arguments. The Committee prepared a comprehensive report pointing out numerous major flaws in the RVRSA’s plan:

and documenting the reasons the Tourne should be saved:

The Big Picture and its Lessons

The Tourne Valley belongs to us, the people.  It is dedicated parkland.  It was set aside to protect it from development.  The agencies then recognized its value.  About 150 acres were purchased by the Borough of Mountain Lakes back in the 1930s.  Later, in the 1960s, the Morris County Park Commission acquired adjoining land using state, federal, and county monies.  The combination of the two was not just a small remote park visited by a few outdoorsmen.  It was the only county natural area serving over 116 thousand people!

Despite the long-range planning of state, county, and municipalities — and the voters — the Tourne Valley was threatened.  The threat did not come from developers.  It came from another government agency that wished to use the land for its own purposes.

The case of the Tourne Valley was thus one of the people versus the people.  A natural area of parkland was desired by two government agencies.  Had the people set aside parkland so it would be available for public destruction?  The precedent would have been far-reaching.  No municipal official would ever again be willing to purchase open space if it could snapped up later by official bodies looking for cheap sites.

Luckily, a small group of dedicated people rose up to confront the government.  They persevered and won.  We have them to thank that the Tourne is available to us today.  But in a larger sense, we owe them thanks for showing us once again that individuals can make a difference.

——————-
Material for this write-up was taken from the Committee Report and from an interview with Jerome Uhrig, one of the principals.