The appeal that Mountain Lakes Residential Park had a century ago was visible in its residential and landscape architecture. Less tangible, but inspiring that architecture, was a set of ideas about the elevation of character through the refinement of supportive surroundings. The most influential promoter of the ideas was the early 19th century landscape architect, Andrew Jackson Downing, who wrote that “our works and our surroundings corrupt or refine our souls. The dwelling, the walls, the windows, the roof, the furniture, the pictures, the ornaments, the dress, the fence, the hedge – all act constantly upon the imagination and determine its contents.” This was the thinking behind seeing the country as a far more fitting place than the city in which to raise a family.

In the First Decade 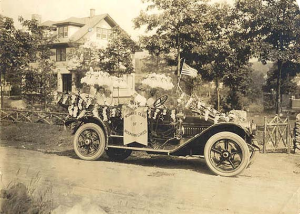 The Women’s Club car with its president, Mme. Belle de Rivera at far left, 29 Dartmouth Rd in the background on July 4, 1915

It was the ideal Mr. Hapgood used in designing his community. But it would have to be realized by the people who moved there. It was Hapgood’s vision that attracted just the sort of idealistic and determined pioneers needed to create a community in the wilderness. And the task fell naturally to the women who lived there all week while their husbands commuted to NYC. Their role was the one they played in their own families, now extended into the community to create schools, churches, clubs, gardens, and that new community’s culture.

One of these notable women was Mrs. Lila Houston who with her husband John and two young sons moved into 35 Dartmouth Rd. on April 21, 1911. She wrote about having hosted the first meeting of the new community residents, about 30 in number, in her home on May 20th. In subsequent correspondence, she wrote, “we all liked our houses and believed in the future of Mountain Lakes even though there were many things to be done and endured before the dream which had brought us could come true.” Everyone’s aim was to create a community, but before that would be possible, it would be necessary to make the place livable.

The second meeting was at the Luellen’s home, and it was there that the Mountain Lakes Association was formed. Mr. Hapgood attended the third meeting to hear the grievances of the residents, most critically about water supply. John Houston was elected as its first president.

Lila Houston was also the organizer of the first club in Mountain Lakes, the Flower Guild in 1913, and one of the organizers of the Woman’s Club in 1914 whose first president was Madame Belle de Rivera. The Woman’s Club listed the interests of its women as: Drama, Civics, Art, International Relations, Home Economics, and Education. Thirty years later, it added Literature and Drama, and Social Welfare, to its interests as departments. Its Educational Department founded the first library here at the Lakes Drive School in December 1914. It became the Mountain Lakes Free Public Library in 1916. In 1922, Lila Houston became the first president of the College Club that had been started in 1921 by Elsa Mueser to provide serious study and discussion for women with college degrees. It became a branch of the national American Association of University Women (AAUW).

The interests and roles of women described by the Woman’s Club were best exemplified by Theresa Wilson. In 1920, the St. John’s School, founded in Boonton in 1909, was moved to Mountain Lakes. Theresa Wilson was a teacher in the school run by her husband. When he died in 1923, she became its Headmistress, a post she held until her retirement in 1959. She was President of the Woman’s Club in the 1930s, founded the Chamber Music Society in 1933, and was President of the College Club in the early 1940s.

In 1943, a Civics Group was established out of members of the Woman’s Club and the Morris County League of Women Voters. Its purpose was to conduct a study of the town. The study produced the first booklet in the Know Your Town series to survey Mountain Lakes. The Civics Group then became the League of Women Voters of Mountain Lakes in 1944.  In its next edition in 1954, This Is Mountain Lakes, the League included the first history of the borough (written by Loretta Boeché), and a sufficient quantity of that booklet was purchased by the Borough Council to send one to each household.