The School of Individual Instruction

Just a year after the first families moved in, some of the leaders of the Mountain Lakes Association, represented by Messrs. Luellen, Kortenbeutel, and Doremus, began to consider establishing their own school right in Mountain Lakes. They formed themselves into an education committee, and began their planning. They believed that they were living in an improved community that deserved improved schools. Furthermore, half of the parents in town had declared that if an ordinary district school were to be established here, they would send their children to private schools. The leaders felt sure that residents would support the school financially, but that after a short time, the Boards of Education of Hanover and Boonton would assume that responsibility.

In 1912, Lawrence Luellen had been reading a series of articles in the Ladies Home Journal about an innovative teacher and disciple of John Dewey’s educational philosophy named Ella Frances Lynch who was teaching in Atlantic City, NJ. The committee brought Miss Lynch to Mountain Lakes and conferred with her about hiring two teachers she had trained in her methods. One was Blanche E. Lewis who would be paid $900 for 10 months; the other would be an assistant teacher named Marion C. Smith, who would receive $600 from Hanover Township funds.

In order to implement their plans, it was necessary for the leaders themselves to commit to personally guarantee to the Boards of Education Miss Lewis’s $900 salary, which they did, being sure that they could raise the funds from community organizations and families over the course of the school year. 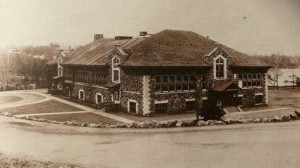 The Lake Drive School soon after its 1920 addition.

Mr. Hapgood offered them the use of the house at 8 Larchdell Way, with Hanover and Boonton having to pay only the carrying charges—the electrical and heating costs. In addition to the living room, dining room, veranda, and two bedrooms to be used as classroom space, there would be two bedrooms and a kitchen for the rent-free use of the teachers. Absent such space, the teachers would probably have to board in Boonton.

The School of Individual Instruction opened on September 16, 1912, and served that purpose for the borough’s first two school years. For its second year, with a larger student population, it was moved to a store at 50 Midvale Road. In November 1914, a more traditional school in a new stone building with four classrooms was erected on Lake Drive occupying a two-acre lot donated by Mr. Hapgood. It was enlarged to 15 rooms through an addition in 1920.

In addition to Atlantic City, Miss Lynch established Schools of Individual Instruction in Philadelphia, New York City, Ridgewood, NJ, and in the Adirondacks where she had once taught in district schools. In the 1920s, schools of individual instruction were known as “the Scarsdale plan” after the affluent community north of NYC.

In 1914, Harper and Brothers published her book, Educating the Child at Home: Personal Training and the Work Habit, in which she promoted the opportunity for mothers for home instruction and education in English, poetry, spelling, arithmetic, writing and drawing, observation, and the work habit.

The individualized instruction emphasized reading, writing, spelling, and arithmetic. There was an unstructured classroom day that encouraged the pupils to progressively learn from those subjects that most interested them, and they proceeded at their own pace. There were 25 students from beginners to high school sophomores. The beginners received two hours of instruction per day, and the others received four hours. The school day ran from 8 AM to 4 PM. 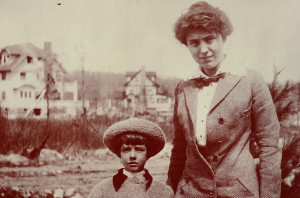 For the September page of the 75th Anniversary calendar (1986), we used an archival photo showing Miss Ramona Tripp (at age 17) with John M. Houston (at age 4 years, 9 months), elder son of Lila and John L. Houston, the president of the Mountain Lakes Association. Miss Tripp was a teacher’s aide who would be married five years later in the Community Church. She lived in Saratoga Springs, NY in her final years where, into her late 80s, she taught five and six year olds to read in a class that was part of Skidmore College’s Educational Training. She died there in 1988 at age 93.

If Master Houston is representative of what the school could do for its students, it did a lot. He subsequently attended Williston Academy in Massachusetts, the American University in Washington, DC (B.A.), and the University of Florida (M.A.). For many years, he was head of the English Department at Morris Junior College in Morristown. He spent his later years in San Pedro, California where, after his retirement, he was active as a writer of historical material about San Pedro. Earlier in his career, he also wrote plays, and one of them – Strange Road (1933) – became quite popular with Little Theater groups. He died there in 1985 at age 77.

It is difficult for us a century later to fully appreciate how a Mountain Lakes Association composed of a handful of the earliest residents, meeting together for only a year, could commit itself to so innovative an initiative on behalf of all their pioneering neighbors. It is one more example of the leadership and clear vision that the Association and the earliest residents of Mountain Lakes displayed that enabled them to persevere in accomplishing so much toward building the new community in so short a time.

Much of the explanation for our community’s growth can be found in the social and political context in which it was planted and grew. Today it is seen clearly to have been a Progressive Era (1900-1916). The best evidence for that is the national election of 1912 in which all three presidential candidates were progressives – Woodrow Wilson, Theodore Roosevelt, and William Howard Taft. Roosevelt even established the new Progressive Party on which to run when the Republican Party proved not as progressive as he desired. Never before anywhere in the world had the major candidates for the highest political office in the land been so aggressive in promoting their progressive values. And the three candidates finished the race in order of their progressivism, in the order given here. That optimism, the conviction that anything was possible in the new era, was just the zeitgeist needed to nourish the new ideas taking root here.

John Dewey (1859-1952) was the era’s most influential philosopher of education. He promoted the improvement of American society through the ability of teachers to develop the critical thinking and the cooperative abilities of schoolchildren. The aim of the teacher should be to guide students in discovering meaning in what they were learning by interacting with their curriculum and relating what was being learned to their previous experiences. The aim of the school, Dewey professed, should be to promote free inquiry, tolerance of alternative viewpoints, and free communication as seedbeds of a democratic society. The aim of education was to develop the moral character of students by cultivating their capacity for the exercise of practical reason through problem solving. He believed that would produce citizens best able to contribute new ideas as members of a participatory democracy.

Dewey saw the essential source of participatory democracy in “neighborly communities” where face-to-face interactions can inspire in ordinary citizens the capacity for deliberative thinking that reveals the intelligence implicit in their life experiences. He would surely have felt at home in Mountain Lakes, and he would have celebrated the success of its civic process as a validation of his philosophy. And I think we may presume that the attraction that Dewey’s educational philosophy had for the Association leaders reflects its consonance with the vision they had for our future.