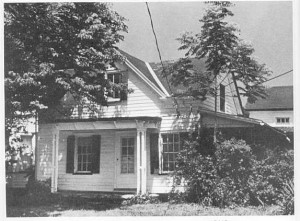 This house, which was entered into the National Register of Historic Sites on April 4, 1977, was constructed in the late 18th century, and was home to the Grimes family, a Quaker family active in the New Jersey antislavery movement. Dr. John Grimes (1802-1875), the most noted and vociferous antislavery advocate in the family, was born in this house and lived here until 1828 when he moved to nearby Passaic County to practice medicine. In 1832, he moved back to the homestead in Morris County and subsequently relocated to the neighboring community of Boonton. New Jersey’s citizens were divided over the issue of slavery. Many people in New Jersey were sympathetic to the southern slave owners who had economic as well as social ties to the state. This faction was challenged by another group, largely comprised of Quakers like the Grimes family, who publicly opposed slavery. Once arrested for harboring a runaway slave, Dr. Grimes was repeatedly harassed by supporters of slavery while living at this house and later at his home in Boonton. Dr. Grimes’ participation in the Underground Railroad is substantiated in his 1875 obituary in the newspaper Jerseyman, that stated, “In the earlier days, his father’s house, Mr. Jonathan Grimes of Parsippany (Mt. Lakes today), was a prominent station on the celebrated Underground Railroad. In later days it was transferred to his own home in Boonton through which many a poor runaway has been helped on his way to Canada. They came to him from Baxter Sayre, Esq. of Madison (long since dead) he forwarding them in the night to Newfoundland, the next station.”

Norman Van Ness Grimes was the last member of the family to own the Grimes Household which then stood at 45 Bloomfield Avenue, Mountain Lakes. He inherited it in 1926, and continued to live there until he sold it in 1963 to the Boonton Young Men’s Christian Association. On May 25, 1946, a researcher, Alex D. Fowler, called on Mr. Grimes with the purpose of learning what he could tell about the house and the Grimes family. The following is the substance of what Grimes told him, as recorded in his notes of the interview.

The house had been the homestead of more than one William H. Grimes since the 1840’s or earlier, and, by family legend, it had formerly been the Righter homestead. Grimes believed that the first William H. Grimes, the one who lived there in the 1840’s, had married into the Righter family. He also stated that he was a direct descendant of the father of Dr. John Grimes, famous for his anti-slavery and underground railroad activity in Boonton. He did not mention the house’s having been a station on the underground railroad, nor did Fowler ask him about it, for Fowler was then unaware of the importance of the answer to that question.

Some years ago, but after Fowler’s interview with Norman V. Grimes in 1946, he did some research on the house and on the Righter and Grimes family connection as well, and confirmed in substance Mr. Grimes’ account. Later Fowler returned to his study the history of the house. The results of his more recent and the earlier studies may be summed up as follows:

The progenitor of the Righter family in Parsippany appears to have been Gasper Righter, who, by tradition, was a native of Pennsylvania, a soldier in the Revolutionary War, and, by record, a resident of Hanover Township in Morris County in 1778 when he was taxed on 97 acres of improved land, valued at £9550, and on 100 acres of unimproved land, valued at £2200. By the time Gasper died in 1794 at the age of 54, he had acquired a total of about 350 acres of land, which had to be divided among his surviving six children by Commissioners because Gasper died without making a will, and four of his children were under age.

One of the youngest of his children was Michael, born in 1788 who, on January 6, 1810, married Margaret, daughter of Edmond Kingsland of Boonton. Their daughter, Ann Elizabeth, born January 25, 1812, was later to marry William H. Grimes. Michael’s allotment of his father’s land included his father’s homestead house lot, but this he chose to sell to his brother, John, in an exchange of properties. Besides, Michael had already bought what he must have thought was a more desirable place of residence from David Sergeant and wife on November 18, 1812. This was a 10-acre tract having a north-south length of 1422 feet, and an east-west width of a little over 300 feet. About half the acreage lay north of the Turnpike road, viz., Bloomfield Avenue.

David Sergeant had bought the same 10-acre tract on March 12, 1800, from Thomas Husk, at a cost of $225, and sold it 12 years later to Michael Righter for $1000. This suggests that David Sergeant built a substantial house during his 10-year tenure; also that, if there was any house on the tract when David bought it, it must have been a very modest affair indeed. Earlier owners of that tract can be traced back through Thomas Husk to the Tichenors, Zopher and Martin, to September 6, 1784, but the identity of the 10 acres gets lost as a tax item in the larger holdings of the earlier owners.

Michael Righter, at the age of 25 years and nine months, died February 15, 1814, without making a will. Shortly after his death, his son, Michael, Jr., was born (according to family tradition). Presumably, the mother and two children lived on the place, which had come to be known as Michael Righter’s homestead, until the children were married, Ann Elizabeth to W. H. Grimes, and Michael, Jr., to Mary, and until their mother died c.1840.

There were at least two Jonathan’s in the Grimes family: one who married Mary Ennis on Oct. 1, 1761 (both being from Bergen County), later fought in the Revolutionary War, and in 1776 bought land in Morris County in the vicinity of Halseytown and in the Kearny Tract, a little north of Whippany. He and his wife, Mary, were the parents of John and Jonathan. John, we believe, died in young manhood about 1795, and “Jonathan, Jr.” made his appearance in the tax rolls as a young man from 1795 until 1797 when he was married, or, at least, had the designation “young man” dropped from the record.” The family historian, probably William H. Grimes, Jr., recorded that Jonathan was born in Halseytown in 1773, and died in 1845. He married Hulda Leonard (1776-1849), and they became the parents of the following children who survived them:

Of his father’s family, viz., Henry (or W. H.) Grimes, he records his father’s marriage to Ann Elizabeth, daughter of Michael Righter, on January 6, 1810, and their children:

When William H. Grimes died in 1884 he devised his present residence comprising a house, outbuildings, and about 10 acres of land to his wife, Ann Elizabeth. By the time she died in 1895, only two of her children survived, Eliza A. and William Henry, who inherited equal shares since their mother died without making a will. The following year, on Sept. 16, 1896, William H. Grimes conveyed his half interest in the homestead to his sister, Eliza A., excepting therefrom a few acres conveyed to him earlier by his parents. Thus Eliza A. Grimes came into possession of that part of the homestead property that for the most part lay north of Bloomfield Avenue.

The Jonathan Grimes farm of 48 acres, which Jonathan had bought in 1811 and which was adjacent to the Righter-Grimes place, was sold by the widow, Hulda, and her surviving children in 1848 to Daniel Romine, their neighbor on the east. After Daniel Romine’s death in 1862 the farm passed into the hands of his son, Jacob, who, in turn, devised it to his children upon his death Aug. 23, 1895. In March of the following year Jacob’s three children, Ella M. Cole, Samuel D. Romine, and Frederick E. Romine, sold the 48-acre farm to Simon H. McKay, of New York City. However responsible propinquity may have been, the new neighbors, Simon H. McKay and Eliza A. Grimes, were married shortly after September 1896. In 1903, Mr. McKay died, leaving all his property to his wife, named as Eliza G. McKay.

The Jonathan Grimes house and acreage were sold in 1908 by Mrs. McKay to Edwin 0. Quinby. After several transfers, and seizure by the Sheriff, the house with 12 acres of land came into the hands of Harold L. Williamson, in 1937. On the morning of August 13, 1974, the house was destroyed by fire. This house stood at No. 15 Bloomfield Avenue. Mrs. McKay continued to live in the Grimes House at 45 Bloomfield Avenue, until her death in 1926, when by her will she bequeathed the house and 10 acres of land to Norman V. Grimes, and the rest of her estate, real and personal, to nephews, Norman V. and Allen K., in equal shares. In 1928 Allen K. Grimes conveyed to Norman V. any interest he might have in the property devised to Norman V. by Mrs. McKay. In 1963 the property was sold to the Boonton YMCA.

In the late 1970’s, the land on which the William H. Grimes house stood was acquired as a site for a new office building. The new owners offered to give the old house away provided it would be removed without expense to the donor. During a campaign to save the Grimes House, it was placed on the National Register of Historic Places, largely on its significance as a station on the Underground Railway. The Mountain Lakes Historical Society arranged for the moving of the house to a new site at 4 Craven Road.