The Railroad Station at Mountain Lakes, New Jersey, stands on a five-acre lot owned at one time by a former slave named Hero Bull. In 1866, the Morris and Essex Railroad Company began the construction of its branch line from Denville to Boonton, and was completing its purchases of land for a right-of-way, 200 feet wide, through Parsippany Woods, known a half-century later as Mountain Lakes. About midway along the branch, the 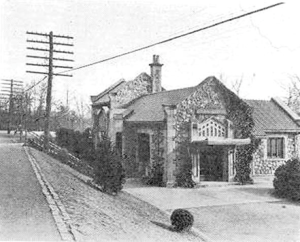 right-of-way cut across the southeast corner of a five-acre lot, called “the Hero Lot,” necessitating the purchase of about one acre from the then owners, John Crowell and Abraham Crowell, who turned out to be nephews and heirs of Hero Bull, and former slaves of Lemuel Cobb, Esquire. Two years later, in 1868, the Railroad Company bought the remainder of the five-acre lot from John Crowell; Abraham Crowell, we assume, had either died in the meantime or conveyed his interest to John. For whatever reason the Railroad Company wanted this wood lot, it most certainly was not for a station, the need for which did not arise until 1912, when Mountain Lakes was developed and the present station was built on it.

What we know about Hero Bull is derived mainly from two documents: his will and his manumission papers. There was clear evidence in his will, dated and proved in 1828, that he was formerly a slave but had been freed. We have no hint how the slave, Hero, came into the possession of a man named Henry Freeman, nor who paid the five shillings to spur Henry on in manumitting Hero. We do know that Henry couldn’t even sign his own name, but Hero Bull could! Possibly Henry, himself, was a freed slave.

John Darbe (or Darby), Hero’s former master, was a well-known physician and an occasional minister at the Presbyterian Church in Parsippany. He lived on Littleton Road where the Cerbo Garden Center now stands, and at one time had owned as much as 205 acres of land in that and in the Fox Hill areas. He died in 1806 and left a will naming a son and three daughters as his heirs, and implying, without naming any of them, that a number of slaves were included in his estate. No record has been found to show which of Dr. Darby’s heirs became the owner of Hero Bull.

In 1823 Hero Bull bought a 7.11 acre lot on Rockaway Neck from George D. Brinckerhoff and wife. This lot also became known as Hero’s Lot, but, as far as is known, it had no connection with the one in Mountain Lakes, which was about five miles away. In 1868 Hero’s house in Rockaway Neck had come into the possession of Abraham Crowell, but by 1879 the Executors of John Crowell sold that property to Asaph V. Edwards. The house stood in the NW quarter of the intersection of Edwards Road with U. S. Route 46.

All the records examined so far fail to reveal how Hero Bull obtained title to the five-acre lot in Mountain Lakes: there is no deed of record conveying the property to him, nor any legacy by which he inherited it. The lists of tax ratables for Hanover Township, covering the period 1778 to 1823, do not contain the name of Hero Bull: his purchase of the 7.11 acre lot in Rockaway Neck was in 1823, probably too late to have been recorded by the assessor in that the last year of the available lists; we can only infer that the Mountain Lakes wood lot was acquired after 1823. On this score we get no help from Hero Bull’s will, as can be seen from the abstract given in the following:

Morris County Wills, Book C, page 413. Dated 16 January, 1828 Proved 13 June, 1828
Will of Hero Bull of Hanover Township, Morris County,, New Jersey, being of sound mind, memory and understanding.1) immediately after my decease my personal property to be disposed of and all my just debts and funeral charges paid.

3) to my granddaughter Loiza, now serving her time with Mrs. Tobias Boudinot, the sum of $10 to be paid within 4 years after my decease.

5) l appoint Jonathan Grimes Executor of this my testament and last will.

Although the will does not tell how Hero Bull acquired any of his property, it does explain how the Crowells, Abraham and John, inherited it. But the will does a lot more. It gives us a glimpse into that “peculiar institution” of slavery, as southern slaveholders were wont to call it, as practiced in Hanover Township. Even as late as 1828, when Hero Bull was making his will, and when slavery in New Jersey was on the wane, many of the fairly well-to-do families owned at least a few them to do the household chores or to help in the cultivation of gardens and small farms. In that one document — Hero Bull’s will — six prominent families in Parsippany were indicated as slave owners. Even so modest a farmer as Isaac Kingsland, owning 60-odd acres on the north side of the Rockaway River, had three slaves.

In Hanover Township, as in the deep south, slaves were bought, sold, bred, and bequeathed, with records of births and bills of sale attesting to ownership. When it began to be suspected that slaves might have souls and some human attributes, slave owners, caught up in the missionary spirit of the times, encouraged their slaves to attend church where special pews were provided for slaves, to take on family names, and to get married. In 1816 the Presbyterian Synod of New York founded an African School in Parsippany to educate “young men of Colour to be Teachers and Preachers of People of Colour.”

Although this project endured for only about six or seven years, it was an important step in recognizing the humanity of slaves. The man named to be executor of Hero Bull’s will was none other than Jonathan Grimes, himself an anti-slavery man, and father of the famous Dr. John Grimes of Boonton, who was a leader in the New Jersey Anti-Slavery Movement, editor of The New Jersey Freeman, and operator of one of the stations of the Underground Railway. If the Railroad Station at Mountain Lakes receives special notice for the significant part it played in the development of the Borough of Mountain Lakes, perhaps it would not be inappropriate to recall some of the history of the land on which it stands, and to remember that it was once…   HERO’S LOT.