Little Theater on the Boulevard

In May 1928, the Mountain Lakes Dramatic Guild was founded by Arthur Stringer and a small group of local people dedicated to the idea that good amateur theatre holds an important place in the life of a community.  Arthur Stringer was a world-famous author and poet (there is a public school in London, Ontario named after him) who had moved to town in 1921 and resided at 140 Laurel Hill Rd.  He was one of the many artists and celebrities who lived in Mountain Lakes in the 1920’s that gave the town its early reputation as a cultural (and somewhat Bohemian) community.

through public school and collegiate institute, he attended University College, Toronto, and later, for one academic year, the University of Oxford.  His first novel, The Silver Poppy, 1903, a cleverly written romance of passion, brought him prominently into the limelight, after which he published many volumes including The Wire Tappers, 1906; Phantom Wires, 1906; The Under Groove, 1908; The Gun Runner, 1909; The Shadow, 1913; The Prairie Wife, 1915: The Hand of Peril, 1915: and The Door of Dread, 1916.  His blank-verse drama, ‘Sappho in Leucadia,’ was an “imaginative, passionate, artistic work of surpassing quality”.  He published several books of verse, of which The Woman in the Rain and Other Poems, 1907, is the most notable.  After he moved to Mountain Lakes in 1921, he wrote several more novels and books of prose including The Prairie Stories and The Old Woman Remembers.

A month after its founding, the Dramatic Guild held an organizational meeting at the home of Mrs. Jennie Robertson who lived at 171 Boulevard in Mountain Lakes.  A charter was drafted setting out the Guild’s purposes and Mr. Stringer was selected as its first President.  Work was immediately begun to renovate an out-building on Mrs. Robertson’s property to be used for their first theatrical production that same year.

Since the Guild’s new home was not yet ready, their first production was in the State Theatre in Boonton on September 28, 1928.  The play, Ice-Bound, by Owen Davis featured a specially written prologue by Arthur Stringer that was “charmingly recited” by Jean Houser (as Jean Hooper, she became a familiar figure to future audiences for 45 years as both actress and director even after total loss of her vision.) Other newspaper comments – “Brilliantly presented … successful … ” The elegant program for the evening contained page-after-page of text outlining the Mountain Lakes Dramatic Guild’s objectives and makeup.  The preface by Arthur Stringer noted that their own Little Theatre was nearly ready to open its doors. 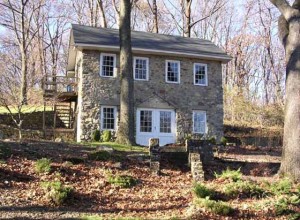 The stone theater at 171 Boulevard

The next production was on December 6, 1928 in the Guild’s new home in the old stone outbuilding in the backyard of 171 Boulevard that had formerly been used to raise chickens!!  These photos show the building as it looks today.  There was a wooden enclosure that contained the box office, long since rotted away, around the front double doors.  The stage was a raised platform in a wooden enclosure, also now gone, attached on the right side of the building.  The audience sat inside and looked through a wide opening in the side of the building onto the stage.  Dressing rooms for the cast and costume & prop storage were on the second floor.

Close your eyes for a moment and imagine you are back in December 1928 and join the audience in the old stone building in the backyard of 171 Boulevard.  It’s a snowy evening.  You drive your new Packard or Oldsmobile to the Boulevard and park at No. 171.  You are dressed in evening attire, with the ladies wearing short beaded gowns.  You walk along the shoveled path in the crisp winter air, through the rose trellises, and up the steps to the entrance of the theater.  You obtain your ticket at the door and enter the building.  There are nearly 80 people already there, seated on 8 to 10 rows of backless benches inside the renovated structure.  The lights dim and the actors take their places on the 20-foot raised stage at the end of the stone building.  The 4-act drama The Narrow Door, by Arthur Stringer, enfolds as the first ‘Playhouse’ production.

The benches were later replaced with 80 comfortable seats discarded by a Paterson theater and dressing rooms were added to the loft of the building.  The Guild began its second season with Barry Conners’ The Patsy in October 1929, presented for the public at the Lyceum Theatre in Boonton as seats in their own theatre were restricted to members only.

Then the first calamity of many to come … the stock market crash 2 months later! They prudently weathered those ‘bad years’. . . their growth best described by Arthur Stringer in the preface to a collection of some of his one-act plays published in 1939: “… since these plays first saw the light of day in that valorous and active band of play-lovers, I dedicate this volume to the Mountain Lakes Dramatic Guild in memory of those adventurous and often laborious but always happy days when with three planks and a passion we built our tenuous pathway to the Land of Make Believe.” 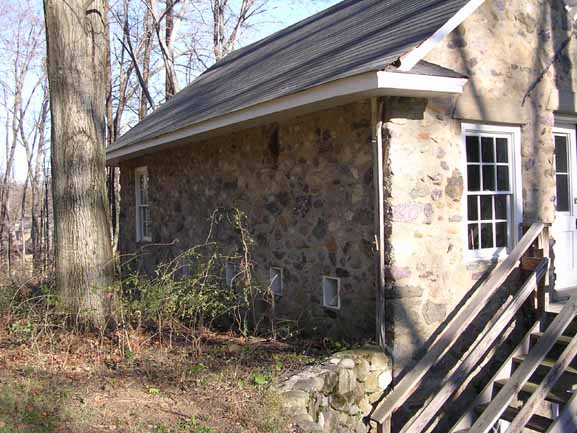 The ‘Little Theatre’ at 171 Boulevard was now securely established as a highly respected amateur group with approximately 100 members.  Membership was limited to age 18 and up, only to Morris County residents and the cost per season was $3.00 for 2 tickets to each of three formal productions plus informal afternoons of poetry readings, music and short plays.  An Apprentice Group was also sponsored in which persons with no acting experience were given an opportunity to take part in informal productions.

In 1939 the Guild departed from its usual format by taking advantage of the availability of the new Briarcliff School auditorium.  Seven Keys to Baldpate was presented to a large audience — an opportunity to mount a large-cast and technical production demonstrating the wealth of talent within its membership.  Two other plays, Nat Jarvis III and Ghosts, are known to have been presented that year in their own ‘Playhouse’, as the stone building at 171 Boulevard was sometimes called.  Nothing But The Truth was one of the Guild’s 1940 productions, but, mostly one-act plays were the fare for the rest of the season.  The membership began to dwindle via the draft, enlistments and preoccupation with world affairs.

The Little Theatre on the Boulevard was used by a professional group in the summer of 1941 but was taken over again in September by the determined Mountain Lakes Dramatic Guild with a 1941-42 season reorganization of nine committees and a strong membership drive.  Here Today was presented in the Fall followed in December by the Guild’s most ambitious cooperative endeavor to-date: three performances of a dramatization of Charles Dickens’ A Christmas Carol with a huge cast at Briarcliff School as a benefit for the Morris County Children’s Home.  There were several county sponsoring committees, radio announcements for all-out attendance, a write-up in Cue magazine, police alerts for the crowds attending a production that made amateur theatre history!! – (10 days after the destruction at Pearl Harbor).

Meanwhile Guild officers were becoming concerned about the group’s ability to continue to provide “dramatic study for its members and furnish wholesome entertainment to the community” in their picturesque, but tiny theatre as the list of potential new members grew.
In 1942 the Guild concentrated its efforts on entertaining servicemen at Fort Dix and other army camps made possible by a constant drive for actors and technicians to off-set gas rationing, etc.  They even managed an occasional performance of one-act plays at their theatre on the Boulevard during the war.  Then Mrs. Jennie Robertson passed away, her property at 171 Boulevard was sold, and the Guild was without a home.

After the war ended, that old dynamic drive came to the fore and, in 1947, the nucleus of the pre-war Mountain Lakes Dramatic Guild merged with the post-war Community Players.  Their first production: The Lady Intervenes written by their 1928 founding father, Arthur Stringer, was presented at the John Hill School in Boonton on January 1948 as a benefit for the Boonton Kiwanis Ambulance Building fund.

Arthur Stringer died in Mountain Lakes on Sept. 16, 1950 of a heart attack he had suffered the previous April.  Stringer had been involved with the literary community in Mountain Lakes for nearly 30 years.  Some of the atmosphere of those days was recounted in one of Stringer’s last pieces: an article in the The Citizen’s Mid-Century Edition, June 30, 1950.”

The remaining Guild members, some of whom dated back to its origin, remained firmly bonded together.  So did their audiences, who followed them to schools, parish halls and restaurants in such areas as Boonton, Lincoln Park and Mountain Lakes.  In spite of the fact that there was no definite schedule, membership hovered around 100.  Participants in this era tell tales of having lost the use of a school two days before an opening after weeks of rehearsals.  On another occasion, the Guild upheld the “show must go on” tradition when a performance was completed after frantic improvisation of lanterns and flashlights when the electrical system failed.

The search for a new home lasted over 10 years.  In 1953, a humorous newspaper article:

“Wanted: That piece of property nobody wants, that large old ham or ice house, that empty warehouse or similar idle building that used to house a shop or laundry.  Must be big enough to accommodate creative work in dramatics after structural repairs convert it into the Little Theatre this area needs.”

Finally in 1953, they moved into an old dilapidated red building an Route 46 in Parsippany owned by a former publisher of The Citizen, that had been a blacksmith shop.  Because of it’s outward appearance, people began referring to the ‘Little Theatre’ as the “Barn”.

The group operated in the building for six years but then the building was sold in 1960 and the new owner announced plans for the property’s use.

A two and a half year search ensued for land on which to build a real theatre finally succeeded in finding a lot in Montville.  Fund-raising in the form of pledges expanded the existing building fund.  On April 9, 1966, the group had their first production in their new theatre on Skyline Drive in Montville with a 200-seat auditorium in what was officially named The Barn Theatre Guild.

And to this day, the group that started as the Mountain Lakes Dramatic Guild in the hen house on the Boulevard continues to delight audiences as The Barn Theater.

Material for this article was taken from a history of the Barn Theatre by FRAN FLEMING on the Barn Theatre Web site, from material obtained from Frank and Pat Kelleher, the present owners of the 171 Boulevard property, and from “A Special Supplement to The Citizen Commemorating the Golden Anniversary of the Borough of Mountain Lakes, Its Life and Time 1911 – 1961” published June 1, 1961.