In the early days of Mountain Lakes, the area was much more rural. Woods and farms were all around. Shooting was a popular sport and there was a shooting range used for target practice by local enthusiasts and by the police at a sand pit just south of Route 46 (it was called Bloomfield Avenue at that time) near where TGI Fridays now stands.

After World War II, many men came home from the service who were interested in hunting and fishing. They formed the Mountain Lakes Rod and Gun Club and it had many active members. Members used to go to a quiet spot deep in the woods behind Mountain Lakes for target practice and competition. With the rifle fire, it probably wasn’t so quiet in those days.

In addition, the area was used by the Boy Scouts for gun training and safety using .22 caliber rifles. The Boy Scouts were extremely popular in those days and under scoutmaster Peter Haas the troop had 92 members. Haas would often take the boys camping and shooting back in the Tourne/Birchwood area. The area was so isolated that they felt they were away from everything and they would even go “skinny-dipping” in Birchwood Lake. 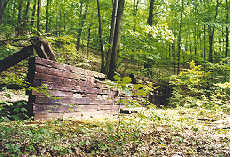 Over time, the rife range was improved. A backstop was constructed out of heavy railroad ties laboriously carried up overland from the Birchwood Lake area. At that time the area nearby, the top of Crystal Road, was not yet developed and was impenetrable.

By the 1970’s, things began to change. The people who lived on Old Boonton Road began to complain about the shooting. Although the marksmen were actually aiming in the other direction and there was a backstop and a hill intervening, the “popping” sound of the guns made those residents nervous. In addition, the Boy Scout program gradually became less popular and the size of the troop declined. Mountain Lakes was growing and becoming more suburban. The rod and gun club membership began to dwindle and the remaining members became more interested in fishing and the quality of the lakes than in hunting. Finally, in the early 1980s, the club was disbanded. The rifle range in the woods that was once so popular and had seen so many good times fell into disrepair and has not been used for many years. In 1987, the Mountain Lakes Borough Council, wishing to guard against the range ever being used again, passed an ordinance forbidding the discharge of firearms within the limits of the borough.

Today, the spot is quiet and serene. The sounds of gunfire are gone. All that is left is an old picnic table and a wall of railroad ties that once formed the backstop. The spots where the targets were attached, chipped and gouged, are still visible. It is a wonderful place to sit and contemplate the camaraderie and good times people must have had here in those days. .

Turn off the Boulevard onto Overlook Road. Continue straight at the intersection with Crystal Road. Park in the cul de sac at the end of the road and follow the trail into the woods. At this point, the tip of Crystal Lake is visible far below you. The rifle range is down the trail about 100 yd.