The ‘Ship’s Chain’ is a massive iron chain, some 200 feet long, strung between concrete and boulderstone pillars in front of the houses on the lake at 324, 330, and 336 Boulevard.  It was apparently brought here about 1921 by Charles Corbin for his ‘estate’ at 330 Boulevard he named “Sun Dance Acres”. 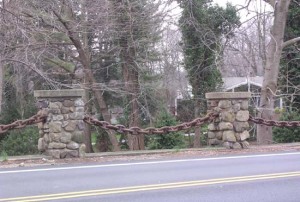 The chain was originally a ship’s anchor chain and was transported from Brooklyn on three trailer trucks.  Corbin is said to have paid $5000 for the chain.  Several attempts to string the chain ended in failure when the supporting pillars collapsed.

Corbin’s home was destroyed by fire in the early 1950’s and the lot subdivided.  New homes were built on the property in 1953.  Luckily, though homes and homeowners have come and gone since then, no one has seen fit to remove this unique bit of Mountain Lakes history.

There is some mystery about the origin of the chain.  One theory is the chain was once carried aboard the great German ocean liner Imperator which was later acquired by the Cunard Line and renamed the Berengaria.  Another theory is that it came from the Vaterland, another of the great German transatlantic passenger ships of years ago.  The Imperator and the Vaterland were sister ships so the controversy is not a major one.

The Imperator was launched in 1912 and entered competition for transatlantic trade on June 11, 1913, her maiden voyage.  Her sister ship came down the ways less than a year later. The Imperator’s name was changed to Berengaria in 1921 when it was purchased by the Cunard Line from the British Government, to which she had been assigned by the World War I Reparations Commission.  Lent to the United States, she sailed as a troopship under the American flag, bringing back AEF soldiers after the war which meant she was in this country off and on during the period the chain was brought to Mountain Lakes.

The Vaterland was interned in the U.S. by the government on her second trip to New York in August 1914.  She was also used as a troopship.  She was renamed Leviathan and refitted by the United States Lines in 1919, increasing her size to 59,997 tons making her the largest ship afloat at the time.  With the increased tonnage, it is likely a stronger anchor chain was needed and the old one left for scrap.  The Leviathan continued in service until 1934 when it became obsolete and was withdrawn from service.

Regardless of which of the great ocean liners the chain came from, it is not only a unique part of Mountain Lakes’ heritage, it is a silent reminder of the days when a great fleet of ocean vessels sailed the seas and provided the only practical way to cross the Atlantic.