When and where were you born?

It was my paternal grandparent’s. Lucius C. and Mary S. Higgins, home. Dr. Knowles came to the house from Boonton. My brothers, Gilbert, Jr. and Dudley, and my sisters, Alma and Catharine, were also born at home at 63 Laurel Hill Road (IO Prospect Ave. at that firm). My maternal grandparents, Eliot and Mary Henderson, lived on Laurel Hill Road gust behind St. Peter’s Church). My mother, Margaret, and my father, Gilbert, were married in their home on June 20,1921,

My late wife, Peggy Lodge, was also from ML and lived at 14 Dartmouth Road. She was class of 1942 at ML high school. The house at 63 Laurel Hill Road is one of the old three-story, 13- room buildings with beautiful parquet floors and chestnut paneling on the first floor. The driveway was very difficult to use during heavy snows and was the devil to shovel.

I learned to drive the family car by going around and around the house. My Dad and I built the dry stone wall along the driveway in the backyard. The large boulders were inched from the woods into place on rollers made from pieces of pipe.

Some of my memories of growing up in ML include the club fire an Now Year’s eve. My mother took me and my two brothers (6,5, and 4 years old) to Halsey Fredericks’dook to watch R. It was almost next to the Lake Drive school property. That was my introduction to ML fires. I joined the Fire Dept. many years later.

I remember the great ice skating, parficularly on Widwood Lake at the borough owned property with music piped-in from the old fire house (borough hall) and flood lights at night. For a couple of winters I had the job of a special police officer at the site.

In 1938 or 1939 when there was a drowning in Widwood Lake, we pulled bags of copper sulfate behind row boats to try to settle the dirt in the water in order to see the bottom. I donl’t remember what child it was. But in 1945 or I & my father rescued the Nelson boy from the icy waters, for which he received the Carneige Medal.

The summers were always great with swimming at Leonard’s beach in the early days and then at Island Beach which I remember as Kelly’s point before the beach. I also had a sail boat on the lake. The start of the oild high school athletic field was in 1939 when The American Legion instituted clearing the woods with many Legion members and their sons doing the work. My Dad was commander of the local Post. 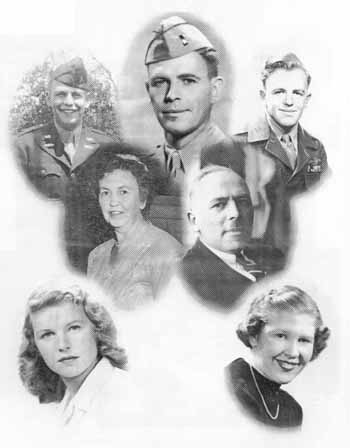 All five of us went to the Wilson School (St. John’s at the time). Boys only went thru 8th grade and went elsewhere for high school. Alma went to ML class of 1945 and Catharine finished at Wilson class of 1953. My brothers graduated from ML high school, 1940 and 1941. 1 went to Montclair Academy for four years, class of 1939, riding PS bus 116. Both my brothers went to Norwich University in Vermont until they were drafted in 1942. 1 went to West Point, class of 1945. Alma went to Contennary in Hackettstown. Catharine did not go to college.

We shopped mainly in Boonton, but also went to Sainey Brothers and Epstains in Morristown. I do have numerous photos of people and places. ML was my home until 1951 when my parents sold the house and moved to Boonton Township. I still consider ML home and visit when I can.

The attached photos are of the family. My parent’s pictures were taken about 1950, Gilbert, Jr. in 1944 before shipping out to Europe, mine in 1946, Dudley in 1949 after his return from the South Pacific war zone, Alma in 1946, and Catharine in 1953. It is from my West Point Class Chronicles publication.

PS Do you have an email address for Lawrence Browning? We used to play together as youngsters.

Stay up to date with latest Coronavirus info from the borough (updated 5/27/20). CLICK HERE.
Hello. Add your message here.