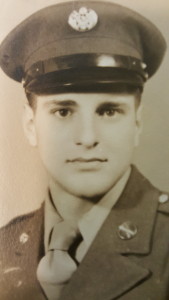 seph Longobardi served in the 14th Armored Division of the U.S. Army from 1943 to 1946, providing support to combat troops in France, Germany and Belgium, maintaining heavy equipment to ensure it got back to the front lines ASAP.

After basic training at Fort Reilly, Kansas, Joseph landed in France with the 136th Ordnance BN in October of 1943. His tour began in an unexpected way. After making port in Marseilles and a ten mile march to set up camp, Joseph’s CO invited his men to join him at the Marseilles opera house, where La Traviata was performed. For Joseph, a man of 18 years, who prior to joining the Army had seldom left his home neighborhood, it was an unforgettable experience.

A few weeks later, assigned to Emergency Repair duty, PFC Longobardi marched with his company to Alsace Lorraine where the men were introduced to the war, encountering fields of wrecked tanks and half-tracks, which they were to repair. Joseph says, “At that stage of the war the American light armor tanks, with their 37-mm guns, were no match for the 88-mm weapons carried by the German armored vehicles.” The company was attacked on two occasions, notably a shelling at Saverne, where many of their number were killed or injured. Joseph was later assigned to the 115th Anti-aircraft Gun Battalion, which was present at the Third Army’s crossing of the Rhine in 1945. He was discharged with the rank of Staff Sergeant the following year.

Back home, inspired in part by his work in the service, Joseph pursued degrees in Physics at Manhattan College and New York University. He worked as an engineer at Aberdeen Proving Ground and at Norden Laboratories He later joined the faculty of the State University of New York Maritime College, as Professor of Physics. In 1978 he was appointed Chairman of SUNY Maritime’s Science Department. His more than 30-year academic career, in which he taught and mentored scores of young merchant marines, and developed a nuclear engineering curriculum to enhance their training, ended with his retirement in 1990.

Joseph says today that he is grateful to have served and to have returned home safely to his family in his hometown, Yonkers, NY. He now lives with his wife, Elinor, in Denville. They have 3 children and 6 grandchildren. His daughter, Marybeth Smith, and her husband Brandon are longtime residents of Mountain Lakes. Joseph’s appreciation of opera persists.