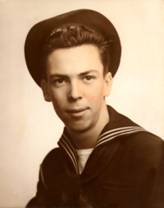 Our 2017 Grand Marshal, Edward G. Manley, was born on Oct 1, 1923, the youngest of three children born to Minnie and Frank Manley. Ed grew up in the Bronx and in 1942 the 17 year old high school senior enlisted in the U. S. Navy to fight in World War II. After basic training at Newport R.I., Ed served 1942-1946 as a Gunner’s Mate on a naval Landing Craft Infantry (LCI). These narrow, seagoing landing craft with a 158 ft. length and 23 ft. beam played a key role in the war supporting amphibious assaults and landings on hostile beaches in the South Pacific.

Ed’s ship, USS LCI(G)-34, was selected for modification: first as a more heavily armed assault support (gunship) and later with rocket launchers, so that Ed and his shipmates were chosen to man the first “Rocket” ship of the U.S. Navy. 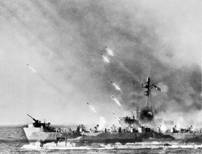 Ed and LCI(G)-34 participated in 19 battles and invasions, one of the biggest of which was fought on Christmas Day in 1943. The mission of Ed’s ship in that invasion of Cape Gloucester, New Guinea was to land units of the 1st Marine Division on the island to seize enemy airfields. After intense fighting the mission was ultimately successful; Ed remembers approximately 300 enemy planes were shot down during that battle. Just one week later and 150 miles away, on New Year’s Day, they were embroiled in the invasion of Saidor, New Guinea, surprising and forcing the unsuspecting enemy into retreat.

It was during the fierce three-day battle for the airstrip on Wadke Island, Dutch New Guinea, on May 18, 1944 that Ed was severely wounded while saving a fellow shipmate from a 20mm bullet. With injuries to his spine, lower back, legs and a severed coccyx bone, Ed was transported to Brisbane, Australia and spent the next 5 months undergoing 5 surgeries to repair his body. Due to the severity of Ed’s injuries, he was ordered back to the United States to undergo more surgeries and treatment in San Diego and later at St Albans Hospital, in New York. In total Ed endured over 20 surgeries to repair his injuries including having his legs sewn together for 6 weeks and having one of the first skin graft surgeries to be performed. Ed’s recovery and rehabilitation was long and difficult; his doctors advised he would not likely regain the use of his legs. Refusing to accept that prognosis, Ed persevered – determined to walk again. On April 29th, 1946 Ed was discharged from St. Albans and returned to his family home in the Bronx where he DID teach himself to walk again. In April, 1946, Ed was discharged from the hospital, returning to his family in the Bronx.

Honorably Discharged from the Navy in 1946, Ed has been awarded several medals of distinction for his military service by a grateful Nation, notably the “Purple Heart”, and with his LCI (G) -34 shipmates -three Navy Unit Commendations for operations in Western New Guinea, Luzon, and Borneo with seven Battle Stars for heroic actions during WWII.

In 1949, he attended The School of Modern Photography in New York City. After receiving his degree, he was employed as a staff photographer with the New York Telephone Company for more than 42 years and rose through the ranks to become the personal photographer to the CEO.

One of the best days of Ed’s life was the day he met his wife Ann Rita Barrett. They met in New York City after the war at an event hosted by Ed’s father for military veterans. After a year’s courtship, Ed and Rita were married on August 6, 1949. They bought a house in East Meadow, Long Island and began raising their family. They were blessed with five children, Glennon, Judy, Patrice, Jane and Jean. With a growing family came the need for a bigger house and less time commuting to New York City – the family moved to Rutherford, New Jersey in 1961. In 1989, Ed retired from the NY Telephone Company and he and Rita moved to Lake Worth, Florida. Ed became a Deputy Sherriff with the Palm Beach County Sherriff’s Department. Ed has held and maintained active memberships in the VFW, American Legion, Knights of Columbus, DAV, and The Military Order of the Purple Heart. 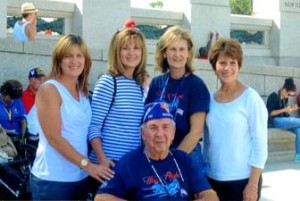 With the passing of Rita last year, Ed’s daughters oversee his care. He spends his time in Mountain Lakes with his daughter and grandson Jane and Luke Hayward. When not in Mountain Lakes, he divides his time between his “girls” and their families, Judy and Tom Warenkiewicz in Marlboro, NJ, Jean and Don McElroy in Hamilton, VA and Patrice Manley in Greensboro, NC. Ed is blessed with 6 grandchildren and 5 great grandchildren.