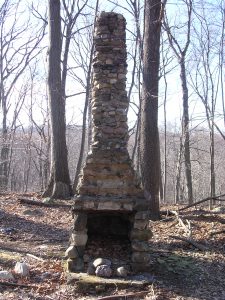 There is an old stone chimney in a remote location back in the woods in Wilcox Park.  It’s relatively unknown — few people know it’s even there.  And still fewer people know its provenance. Below is an excerpt from the oral history of David Higgens interviewed by John Grossmann on October 11, 2006:

JG: What else do you remember?
DH: The woods, which is now Richard Wilcox Park near the Tourne. There used to be several log cabins, built by young fellows who lived in Mountain Lakes.
JG: The kids cut down the trees, sawed the logs, assembled the logs?
DH: Yep. Everything. When you think of it, just hand tools, no power tools. This was the twenties, early thirties. I remember two log cabins, specifically. One was in what was called Rattlesnake Swamp. That was called Adams cabin. It was relatively small. There was another one on the hill going down into Rattlesnake Swamp, on the side of the hill about a quarter of a mile away. This was built by a fellow by the name of Shute and his friends. He lived on what is now North Briarcliff. When you think back, it was quite an undertaking. It had a second floor that overhung the first floor — all out of logs. There was a fireplace and chimney — stones mortared in. About the size of this living room we’re in, on the ground floor. The second floor overhung about four feet.
JG: Fifteen feet wide and about twenty feet long?
DH: Yeah. Open windows. A dirt floor downstairs, a wood floor on the second floor. A roof with planks and tarpaper on it. It was probably a good half-mile down this hill. Little narrow path. Sand bags of cement and stones for the fireplace and chimney were hauled in and water from a nearby stream. It was quite an undertaking.
JG: You spent some overnights there?
DH: Oh yeah.
JG: They were just kind of there for Mountain Lakes kids who were friends of these individuals.
DH: Yeah.
JG: How many kids might spend an overnight in them?
DH: The last time I remember it was myself, one of my brothers, and two other neighbors. I remember when we woke up, my brother who’d gone outside came running back yelling: “Skunk. Skunk.”
JG: So summers you were here in town, doing what?
DH: Swimming. Boating.
JG: Some nights you might overnight in the cabin? And cook hot dogs?
DH: Cook in the fireplace.
JG: No girls allowed. This was a guy thing?
DH: This was all guys. Smoking, I guess. But in those days there was no problem with drinking.
JG: Meaning it didn’t get out of hand or it just didn’t happen?
DH: It didn’t happen.
JG: Those log cabins, they’ve since disappeared?
DH: The last time I was at the big one — it had purposely been torn down. That was in 1942. It was sad to see it go.  I remember, must have been summertime, a friend of mine and I had gotten a job making an outdoor fireplace for a friend of my mother, up on Laurel Hill Road. We’d never built an outdoor fireplace before. [He laughs.] We used my mother’s car and went up to the Tourne area and picked up stones. It was a wonder we didn’t ruin the car.
JG: How’d that fireplace turn out?
DH: Good.
JG: Still there?
DH: I don’t know.

Below is an excerpt from the oral history of Skip Watts by Tim Delchamps for the Historic Preservation Committee of Mountain Lakes, New Jersey, August 21, 1994.  It isn’t exactly consistent with the Higgen’s history.  That’s common with oral histories. 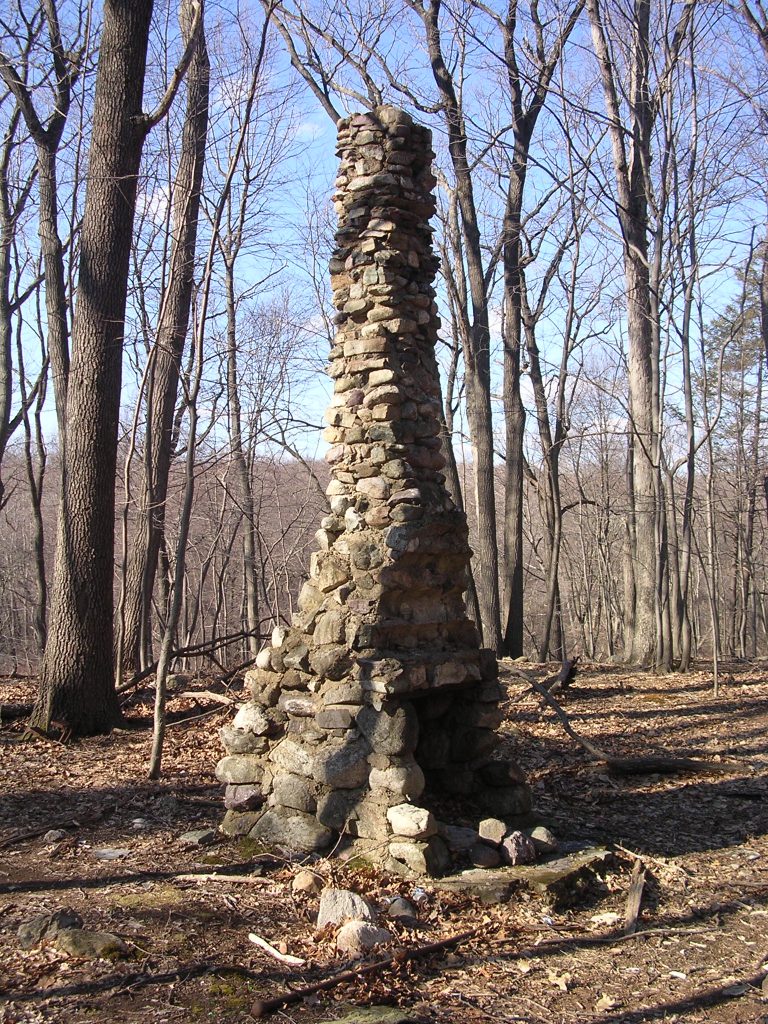 SW: Okay. I’ll tell you what come-pops into my mind. There was a family named Hobby who lived on Morris Avenue. And the Hobby boys were absolutely the world’s greatest log cabin builders going. And they had four-to my knowledge, at least four log cabins built out in Rattlesnake Meadow.
TD: Yes.
SW: There was the block house at Bubbling Springs. There was the log cabin at Deer Ridge and there were a couple of others out there. And I can remember as a kid, oh, my Lord, every summer I would disappear and I’d spend the summer out living in one of those log cabins.
TD: Yes. They were very, very handy people. And they had-also, they had horses and they had a pony cart, and the house they lived in was right at the base of the hill-
SW: Right next to my-
TD: -on the railroad track side.
SW: Right next to my Uncle Lou.
TD: Right next to the Lewellyn one.
SW: Ya, Lewellyn one and-
TD: They had a little stable, in fact.
SW: And also, little known that Mr. Hobby was the town bootlegger [chuckles] during the times-
TD: That’s what he used the stable for-
SW: [laughs] Ya.

At one point, the author (Andy Bulfer) and Jerry Uhrig did a careful search of Rattlesnake Meadow hoping to find further evidence of the cabins, but were not able to uncover anything.

Start at the Birchwood Lake parking lot and take the trail on the right side of the lake. When you reach near the top of the lake, turn on a trail blazed red that goes off to the right. Follow it to a Y junction at which the red trail (blazed with red indicia) goes right and a blue trail goes left. Take the left leg (blue) and follow it for 100-150 yards. The chimney is on the left barely visible about 100 yards back in the woods.

Take only pictures.  Leave only footprints.