A. Grimes Household (1733). This wood frame house is on the National Register of Historic Sites. The farm, house and out buildings stood originally near 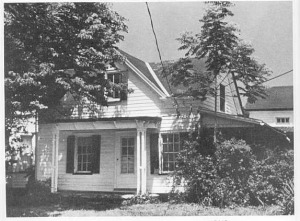 Rt. 46 where an office building is now. It was originally a one-room dwelling. An addition contains a concealed closet believed used as a hiding place for fleeing slaves and a link in the “Underground Railway”. It was relocated to 4 Craven Road in 1979.

B. Righter House (1732). Once used as a popular tavern and inn on the road between Parsippany and Rockaway, it is now a residential dwelling.

C. Community Church (1914). The cornerstone was laid in 1914. The church has been a vital part of the religious history of the Borough residents for many years.

D. Lake Drive School (1914). This was the first school built here. A four-room building of fieldstone, it housed Grades K-9, An addition was built in 1921.

E. Mountain Lakes Railroad Station (1912). The first train stopped here in November 1912. For many years the railroad was the principal means of commuting for most of the Borough’s wage earners. 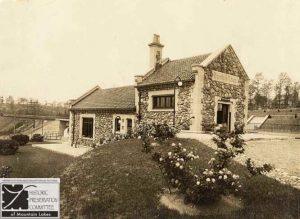 G. McNeill House (1803). [Footnote 1] Originally built as a saltbox in the old town of Boonton, it was moved to this site in 1900 just before the construction and flooding of the Jersey City Reservoir.

H. Walker Howe (1813). [Footnote 1] The original section of this house was built by Jasper Romine. This home has undergone several alterations and renovations.

I. Stagg-Romine House (1778). [Footnote 1] A wooden Dutch farmhouse at 120 Intervale Road, it was built in two sections by Elizabeth & John Stagg. Four generations of Romines have inhabited the house.

K. Shulte House (1875). [Footnote 1] Originally built as a clapboard structure for the Ball family in the late 1700’s, the main portion of the house is a Victorian addition constructed in 1875.

L. Rame-Hart [Footnote 1] This structure was formerly part of the Grimes homestead. It has been converted for industrial use. 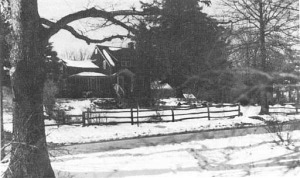 N. Mountain Lakes Club (1914). This private club was the center for many early community activities. It is still used today.

O. Ferris House (1911). [Footnote 1] This was the first house built here by the developer, Herbert Hapgood. It was occupied by the family of L. Luellen, originator of the Lily Paper Cup.

During the period 1941 to 1946, Bell Laboratories tested various sonar devices in Crystal Lake. This lake was chosen because a very quiet lake was needed, and there was only one house there at the time. This property was leased and numerous new structures built. The southern end of the lake, where the testing was to be done, was dredged to about 14 feet, twice the previous depth.

The devices tested included both those for torpedo guidance and those for submarine detection on board ship. These ranged in frequency from 5,000 to 70,000 hertz, most in the 25,000 hertz range. The large scale of the installation and the number of devices tested made Crystal Lake one of only a few major test installations in this country at the time. Incidentally, sonar has no effect on fish. [Footnote 2]

During the era of ice boxes, the upper three lakes were owned, operated and probably constructed by the Fox Lakes Ice Company. Barnlike icehouses were constructed over the surface of the lakes to allow the workers to slide the ice blocks inside. There were two ice houses on Sunset and Birchwood and three ice houses on Crystal. A railroad spur left the main line near Dixon’s Pond, went along Pocono Road, proceeded near the edge of the lakes just east of West Shore Road, angled to the west side of Birchwood Lake and continued down Rattlesnake Meadow toward the Tourne. [Footnote 3]

A trolley line ran through the Borough for many years. It was operated by the Morris County Traction Company between Boonton and Denville. It was a typical, one track “Toonerville Trolley”. Currently, its former roadbed provides the excellent pathway paralleling the Boulevard. [Footnote 4] 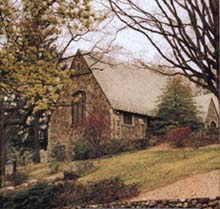 The cornerstone for the present building was laid in October 1926 and the first service was held in the new church just one year later.
(Photo courtesy of St. Peters)

Herbert Hapgood, Mountain Lakes’ developer, had some experience before he developed Mountain Lakes. Some time earlier he had developed an area of Shoreham, Long Island in a similar fashion. If you go there today, you will some of the identical street names as in our borough. Also many of the houses look very similar.

A unique row of trees borders the Boulevard on its west side. They are between the roadway and the pathway (former trolley line). These trees were planted in the early 1930’s. The idea and money were provided by a Bell Labs engineer who was serving on the school board, a Mr. “A”. The trees were planted by volunteers. Five different species were planted in a repeating sequence. The cost of the trees was 15 cents each.. [Footnote 5]

1. Name of owner at time of publication

2. Interview in October 1979 with Roland Mueser, resident on Crystal Lake and employee of Bell Laboratories.