There are three popular trail areas in Mountain Lakes: Tourne County Park/Richard M. Wilcox Park in the Tourne area to the west, Halsey Frederick Park between the MLHS tennis courts and the YMCA, and the Maple Way Woodlands east of the railroad tracks. 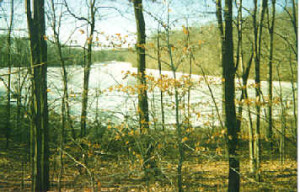 On a clear day, hikers who climb to the top of the Tourne County Park will be rewarded with a panoramic view of the New York City skyline.  Appropriately, the name Tourne is derived from the Dutch word meaning lookout or mountain.  A total of 545 acres comprises this ruggedly beautiful park, located in the Township of Boonton and Denville, and the Borough of Mountain Lakes.  The park was opened for public enjoyment in 1960.

The Tourne is the only remaining undeveloped fragment of the Great Boonton Tract, purchased by David Ogden, Colonial Attorney-General of New Jersey in 1759.  McCaffrey Lane, which serves as the main entrance to the park, was created in 1767 by Samuel Ogden to haul iron ore from Hibernias mines to his iron works in Old Boonton.  Within this historic region, cannon balls were manufactured for use by the Continental Army during the American Revolution.

Clarence Addington DeCamp (1859-1948) inherited and acquired during his lifetime much of the land now preserved as Tourne County Park.  Using hand tools and levers, Mr.  DeCamp built two roads to the top of the Tourne and encouraged the citizenry to enjoy the forests and fields with him, thereby becoming one of the first conservationists in Morris County.

Visitors can see interesting features such as a wildflower trail and bird sanctuary.  The park offers opportunities for hiking and cross-country skiing as well as pleasant family picnic sites.  There is also a ball field area which can be reserved for group outings by calling Park Police headquarters at 326-7631.

Interesting things to see in the Tourne/Birchwood area include:

Briarcliff EIC Projects on the Tourne

In the 6th grade Environmental Integrated Curriculum project on the Tourne, each student picked a topic and did separate sub-projects on that topic in Social Studies, Science, Math, and English.  These are high grade research projects on interesting aspects of the Tourne.

History of the Tourne

For a fascinating history of the Tourne including the story of its famous murder, click here.

How The Tourne Was Saved

Read the inspiring story of how a group of local people from Mountain Lakes and surrounding towns who loved the Tourne saved it from destruction.

Halsey Frederick Park access is from Powerville Rd. opposite the Mountain Lakes High School parking lot. It includes the Mountain Lakes sports fields, the woods surrounding the fields, and a low-lying area extending to Morris Avenue.

The trail area has undergone transitions typical of much of this north-central New Jersey. One hundred fifty years ago in the mid-19th century, this area was farmland. The farmhouse was on what is now Fanny Road, and the outbuildings were closer to Powerville Road. There were small fields in between. One hundred years ago in the early 20th century, the farm was gone and the central feature of the area was a dump which was used both by Boonton industry, especially Boonton Rubber Molding where bakelite was invented, and by early Mountain Lakes residents. The dump was situated below the lower playfield. Surviving artifacts, such as bottles, pots and pans and of course bakelite, can still be found in the area of the dump.

Later in the 20th century, this area lay undisturbed and became the predominantly mixed oak forest that we see today. In the late 1970s, it was dedicated as a park named in honor of one of Mountain Lakes’ important early mayors, Halsey Frederick. Now we see a large segment of the park once again cleared of the forest to accommodate playfields for high school sports. Times change, needs change.

As you walk the area, start by going down the road past the tennis courts. Take the trail going off to the left. Follow clockwise around the upper side of the fields in a part of the forest that is predominantly upland and dry. As you continue around to the right side of the fields you will pass wetlands, vernal pools, and then to the lower portion of the park. Finally, you will make your way back to where you started.

An interesting site in Halsey Frederick Park is a Mountain Lakes living treasure, a 250 to 300 year old white oak tree at the back right corner of the sports fields. In 2003, despite health concerns stemming from a lightening strike about 50 years ago, a dedicated group of citizens, town employees, and interested parties combined efforts to save and preserve this tree primarily because it’s been here for close to three centuries. Gary Webb, town manager at the time, pulled together a team and guided the effort to save this piece of our living heritage. Before the sports field construction began, borough arborist, John Linson, proposed a plan for saving the tree which was fully supported and approved by the Borough Council.

A slight adjustment was made in the grade and water runoff area of the field nearest the tree based on the arborist’s recommendations. The Mountain Lakes Department of Public Works put down wood chip mulch around the trunk and arrange snow fencing was installed around the root zone for protection during construction. Greenwood Tree Experts of Montville has adopted the tree as a service project and their care has already begun. Cable supports from the trunk to branches have been installed and major deadwood pruning and deep root fertilizing has been completed. Ray Woytas, manager of Greenwood, says the tree appears to be doing well and Greenwood will provide additional care as necessary.

This magnificent tree is an example of what we all benefit from in Mountain Lakes, our trees.

This area along the railroad tracks consists of approximately 50 acres of woods. It boasts a large flock of wild turkeys. It may be accessed from the end of Maple Way, the corner of Crescent and Center Drives, and the end of Yorke Road.

Trails in and adjoining Mountain Lakes:

Other great hiking trails close to Mountain Lakes include:

For more information, try the Morris County Parks Commission web site.  This site lists the county parks in Morris County and a calendar of scheduled events but unfortunately gives detailed descriptions of only a few “featured” parks.

Slightly further way, great hiking can be found at:

The Appalachian Trail, the legendary hiking path that runs nearly 2100 miles from Springer Mountain Georgia to the top of Mount Katahdin in Maine, has a substantial section in New Jersey.  It crosses into New Jersey from Pennsylvania at the Delaware Water Gap and continues northward along the ridge of the Kittatinny Mountains through Stokes State Forest and High Point State Park.  It then turns right and continues eastward until it crosses into New York state near Wawaywanda State Park.  The New Jersey section covers 73 miles. 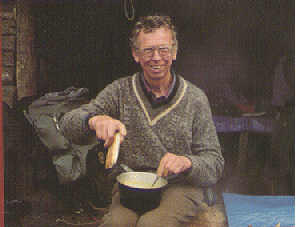 Former Mountain Lakes resident, Roland Mueser, was a nationally renowned expert on the Appalachian Trail.  Mr. Mueser has now unfortunately passed away but his book, “Long Distance Hiking, Lessons from the Appalachian Trail” [Ragged Mountain Press, Camden Maine, 1998] remains a fundamental reference work on the Trail, covering everything from blisters to backpacks and is full of trail-worn wisdom earned the only way that counts — one step at a time.  The book is available at the Mountain Lakes Library.