The trolley was a popular mode of transportation in the days before widespread automobile ownership.  It was inexpensive and convenient and on the Denville/Boonton line ran every 30 minutes from 5:31 AM to midnight.  The cars were enclosed which made them comfortable in the winter (but hot in the summer) and, if they were anything like the 1913 Jersey City trolley car 2431 in the Shore Line Trolley Museum, East Haven, CT, they were 47 feet long and weighted about 48,000 pounds.  They were electrically powered by means of overhead wires.  The electric traction motors that drove the wheels were built by either General Electric or Westinghouse.  The electrical power came from a coal-fired generating station in Dover. 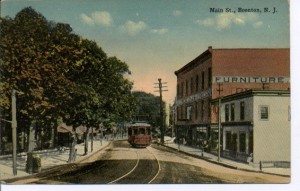 When it reached the top of the Boulevard, the track continued along W. Main St., crossed the Rockaway River, went down the center of Main St in Boonton to Division St., swung left around the corner onto Division St. and terminated at the train station.  Probably there was either a loop or wye track or maybe even a turntable to turn the cars around for the return trip.  Although it doesn’t look like it from the pictures, it is also possible that the trolley cars were “double-ended”.  Double-ended cars were capable of running in either direction with duplicate driver’s controls and trolley poles (the gadget on the roof that connected to the overhead wires) at each end. 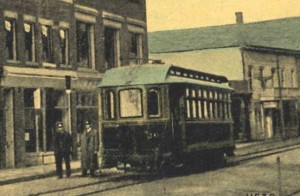 At the other end of the Boulevard, the track crossed N. Pocono Rd., traversed what is now St Catherine of Siena church parking lot, continued across what is now Park Lakes Tennis Club’s parking lot, curved down over Great Bay (which wasn’t there at the time) in the Lake Arrowhead section of Denville, intersected Rt. 46 (which was called Bloomfield Ave. at the time) near Casa Bella Restaurant, paralleled the Rockaway River near where the Bonzai Steakhouse now stands, then curved down to terminate in Denville just west of where Rt. 46 crosses Main St.  The trolley embankment is still clearly discernable along the path from St. Catherine’s parking lot to Park Lakes’ parking lot and where it crossed Great Bay. 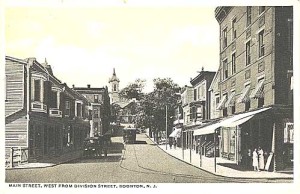 Trolley approaching the corner of Main St. and Division St. in Boonton

At Denville, the Boulevard trolley connected with a much larger trolley system that eventually spanned nearly all of Morris County and even connected to Newark and Elizabeth through Convent Station, Madison, Chatham, Summit, Springfield, and Union.  To the west, the trolley cars ran along major highways through what were then very rural areas reaching Dover, Wharton, Succasunna, Ledgewood, and Nolan’s Point Amusement Park at Lake Hopatcong.  In the other direction, the line went south from Denville through Mount Tabor to Morristown and then east to the towns listed above.  From Mountain Lakes, you could reach any of these destinations by transferring at Denville.

In July 2002, we received the following from Ralph Wells, a long-time resident of Mountain Lakes:

Lloyd Charlton, a member of the Boonton Historical Society, related that he was born and raised across from what is now Del’s Village.  The street was named Schultz St. at the time but its name was changed to Hawkins Pl. during WW-II.  Charlton was born in 1927 and so doesn’t remember the trolley which ended about that time.  But he does remember the steam shovels removing the tracks when he was 5-7 years old.  He said the tracks went up the Boulevard path, then crossed the street at the pillars and went up the right side of West Main St.  Then, at some point, the tracks moved into the center of the road and went down the center into Boonton.  [Note: You can still see where the Boulevard path bifurcates at the pillars with one branch heading across the street.]

At the close of the 19th century, a trolley boom began sweeping America with the perfection of the electric traction motor.  It came to Morris County via the Morris County Traction Company which was formed in 1899.  Constructing the system, laying the tracks through town and country was a big, big job and required a huge amount of capital.  So it took a while to get started.  The first section, in the thriving industrial city of Dover was opened on July 1, 1904.  There was great publicity and excitement when the Morris County”s first trolley car, painted light green with D-O-V-E-R in gleaming silver letters, rumbled down Blackwell St. from the car barn in East Dover to Prospect St.

From there, the system expanded rapidly to the West toward Stanhope and to the East toward Denville.  By the close of 1908, well before Mountain Lakes was founded, the line had reached the center of Denville.  The first car ran to the Delaware, Lackawanna & Western (DL&W) railroad station in Denville on Feb 27, 1909.

During the same period, a start was made on the branch to Boonton.  Some track was actually laid on Main St. in that town in April 1907 and on Division St. in August.

Although rails had been put down on Boonton streets almost two years earlier, as late as June 1909 the trolley company was still undecided on a route to connect those rails with Denville and sent a delegation to Boonton to solicit opinions on the matter.

However, one morning in December 1909, the contractor awoke to find 100 yards of his newly-graded roadbed had literally disappeared! The mishap was blamed on quicksand.  With winter approaching, the trolley company decided to suspend work while it paused to reconsider.

When digging resumed in the spring, it was on a longer and quite different route up the future Mountain Lakes Boulevard. 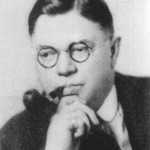 In the interim, the Mountain Lakes Co. headed by Herbert J. Hapgood, had announced plans to develop a thousand-acre tract near what was then called Fox Hill into a community of luxury homes.  The developers offered such inducements to the trolley company that it abandoned about a mile of roadbed already constructed at a cost of approximately $9000 and swung off toward the new community.  Much of the discarded roadbed is still discernible.  About half a mile of roadbed at the Denville end was identical for both routes.

Denville/Boonton Trolley Routes. Note that the Boulevard was not yet cut through to Rt. 46. The lakes labeled “Mt. Lakes” are really Sunset, Crystal and Birchwood. Rainbow Lake appears to have been tiny at the time and the Great Bay non-existent.

More than a mere alteration of route was involved.  The original plan passed through nearly uninhabited territory, including Rattlesnake Valley because it was seeking the shortest and straightest possible route.  It was conceived as a high-speed double-track line that would extend not only to Boonton but beyond to Paterson, forming an alternate main line to the east.  But the more realistic plan adopted in early 1910 was much more modest.  Besides deviating from the beeline to reach potential Mountain Lakes passengers, it was reduced to a single track up the Boulevard.

The section to Paterson was never constructed.  The Morris County Traction Company, as did most trolley companies in the 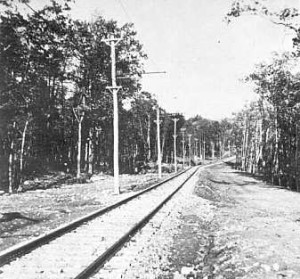 1910 View of the Boulevard looking toward Boonton

US, ran into financial and management difficulties.  The automobile was coming and displaced much of its ridership.  Gasoline-powered buses also began to attract riders over the same routes as the trolleys traveled.  At its peak in 1920, the Morris County Traction Company transported almost 7.7 million passengers a total of 1.42 million car-miles.  In July 1923, the company went into receivership, an event that stunned Morris County.  There were optimistic predictions that the company would recover under the receivers, but conditions did not improve and on October 31, 1927 the company was sold at public auction on the steps of the Morris County Court House.

It snowed on March 1, 1914, the day the first trolleys began running over the entire system.  It snowed again on January 14, 1928 when the last cars ran west of Morristown.  The last trolley ran in Morris County on February 4, 1928.

And so passed the era of the Boulevard trolley.  It lasted only 17 years.  No more moonlight excursions to Lake Hopatcong, no more placing firecrackers on the tracks on 4th of July or greasing the rails on Halloween, no more children pulling the trolley pole off the wires causing the trolley to come to a halt and the engineer having to come out angrily and replace it, no more electricity arcing across the wires on a snowy night.  The Boulevard trolley became only a memory.