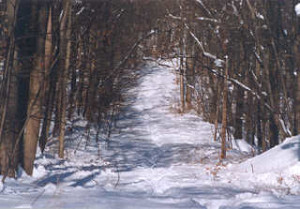 The Tower Hill Sled Run is in an isolated area of Mountain Lakes. It’s a nice long run, almost 1500 ft. and descends steadily downhill — perfect for sledding. Near the bottom, the run levels off so that there is no danger of sledders skidding out onto Overlook Rd. At some point long ago, flood lights were installed atop tall poles for nighttime sledding. The flood lights have long since been disabled but they are still there, like lonely sentries, stationed along the length of the run. The sled run is still used occasionally by neighborhood kids although rarely in recent years because the winters have been mild and sledding has declined in popularity in these days of MTV.

The story of the sled run begins In the 1920s and 1930s. Sledding was very popular with the kids. There were only two decent spots for sledding in Mountain Lakes: the hill on North Glen Road and the south side of the hill on Pollard Road. Of these, Pollard Road was usually the best spot because the morning sun tended to melt the snow on North Glen while Pollard was more protected from the sun.

Traffic was light in those days because the population was relatively small and cars were few and slow moving. Thus the danger to the kids of sledding on public streets was minimal. Old timer Tim Delchamps recalls that when a car was coming someone would simply yell “Car, Car…” and everyone would get off the road until the car passed.

By the 1950s, traffic had increased so much that it was felt that sledding on these public roads was becoming dangerous. So when there was snow on the ground the Borough closed these two roads to all traffic except the homeowners on those streets. The Roads Department would smooth the snow with its heavy equipment and then everyone would enjoy themselves.

Although most residents accepted this arrangement graciously, one homeowner on Pollard Road complained bitterly. As a result the borough leadership decided to construct a sled run that would be safe for kids to use. They chose a large uninhabited expanse of land in Mountain Lakes on the south side of tower hill. The land slopes continuously downhill but is not too steep. A mixture of volunteers and Borough crew cleared the brush on the slope, cleaned it up, and installed lights to make it popular with the kids.

This vast area of land had originally been planned by Herbert J. Hapgood, the developer of Mountain Lakes to have a network of residential streets with names like Longview Road, Cedar Road, Glenwood Road, Locust Road, Ivy Lane, and Poplar Lane. But Hapgood ran out of money, went bankrupt in 1923, and the streets were never constructed. They continued to be carried on the official borough maps however until 1950 when the Borough Council formally vacated the streets by ordinance.

Several old stone foundations are still visible in the area, probably for houses whose construction was begun by Hapgood but never completed. Later, the Belhall Company took over the Mountain Lakes development. They completed some houses that had been started by Hapgood, demolished others, and probably didn’t bother with these that were so deep in the woods. These old foundations are perhaps the only remaining tangible testimony to the visionary Mountain Lakes’ developer’s lack of business sense.

Turn off the Boulevard onto Tower Hill Road. The access trail goes off to the left near the top of Tower Hill Rd. between house numbers 50 and 62. Follow the trail about 100 yd. to the top of the run. The bottom of the sled run is accessible from Overlook Rd.