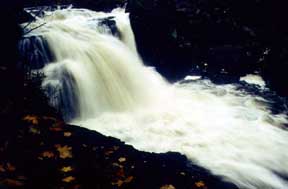 When most people think of Boonton today, they think of a charming little town of antique shops perched on the hilly Main Street. But what many people do not know is that Boonton is also home to a beautiful and spectacular waterfall. Boonton Falls is awesome in its power and a surprisingly well kept secret.

The story of Boonton is a long and proud one. In Colonial times, iron was discovered in Morris County just west of here. Many iron mines opened up in the area. There were furnaces and forges throughout the region that processed the iron using charcoal derived from the vast forests that were everywhere. The original village of “Boonetown” or “Booneton”, was located about 1-1/2 miles to the east of the current Boonton and was named in honor of the Colonial Governor, Thomas Boone, in the year 1761. It was started with an iron forge but was later enlarged to include a rolling and slitting mill — the first in the county. The town was a leader in the iron industry and made many of the iron products and weapons used by the Revolutionary Army. Axes, kettles, horseshoes, tires, cups, rods and sheet-iron were among the items supplied. The industrial might of Booneton was certainly a factor in Washington’s defeat of the British.

Later, in the Nineteenth-century, Morris County continued to be an industrial powerhouse fueled by the iron industry and the Morris Canal. The canal, an engineering masterpiece , wandered through the county on its way from Phillipsburg, Pa to Jersey City. Completed in 1831, it ran through Denville, north along what is now Old Boonton Road, turned right at Powerville, went through the current Boonton, and then turned north toward Montville and beyond.

Unfortunately, the town of Booneton was not on the canal. It was one mile east. Then a group of New York investors opened the “New Jersey Iron Company.” Set along a steep gorge of the Rockaway River right on the canal, the factory took advantage of the water power of the mighty river. Machinery and families of ironworkers were imported from England, and with the erection of the mills, a new town, called “Booneton Falls,” began to appear on the rugged hillside overlooking the river where the current Boonton now stands.

Morris County lost much of its industry when the railroads came, supplanting the canal, and when a better grade of iron was discovered in Minnesota. The New Jersey Iron Company closed in 1876. The canal and the Morris County iron mines hung on a while longer but ceased operation in the early 1900s. The original old village of Booneton was abandoned when the Jersey City Reservoir was constructed in 1903. It’s location is now under water. The closing of the iron company was an economic disaster for the town of Booneton Falls. At some point in the late Nineteenth century, its name changed to “Boonton.” The town, although lovely and delightful, has never regained the economic might that it once had.

But the Falls is still there for all of us to enjoy.

How To Get There

The best time to view the falls is in the early spring when the water flow is at its peak. Park near the Makey Funeral Home just before the Rockaway River bridge on West Main Street and enter Grace Lord Park. Pass the gazebo and head down the path into the woods. There is a dam here with water rushing over it. This is not the falls. It looks awesome but “you ain’t seen nothin’ yet.”

Continue down the path. Soon there will be a grassy area on the left edged by small boulders. Go to the edge of the grassy area and look down — you will get your first view of the waterfall that drops the river some 20 feet in a thunderous roar. This is Boonton’s “Little Niagara.” Do not climb on the rocks.

Continue down the path through the woods until you get to a picturesque old stone bridge. As you cross the bridge, the river tumbles and swirls far below you. Directly across the river is a huge boulder, Washington Rock, once a tourist spot and before that shelter for Native Americans. Walk to the right to see evidence of Boonton’s industrial past, including arches in the ancient stone wall on the left that once were part of the great iron furnaces of the New Jersey Iron Company.

Turn around when the path meets a parking lot of industrial buildings and retrace your steps along the bank of the Rockaway River. Continue past Washington Rock and the arch bridge. At the end of the path is an awesome view of the falls and the swirling water in the basin below. Do not approach the rocks — they are often slippery. Unfortunately, every few years youngsters try to swim in the maelstrom and several have drowned.

Return back downstream. If you are tired and wish to call it a day, turn uphill when you come to a path on your left heading uphill at a slight angle. This will take you to a small playground and park. Climb the steep stone stairway to the street above which is Main Street. Turn left and return to your car.

If still have some energy left there is a lovely walk ahead of you. Return to the rock and recross the bridge. Turn left and walk down river behind the houses on Rockaway Street. Carefully watch your step as the trail becomes ever narrower and more primitive. This is a magical spot. Despite the nearness of the houses behind the trees, you feel alone in the woods with the roar of the river rapids far below you.

Near the end of the trail, you come upon an ancient stone railroad bridge and a strange circular ring of stones. The bridge is the remains of a railroad branch line built in 1866 that connected Boonton to the main line running through Denville. Freight trains brought raw materials to the iron mills, hastening the decline of the Morris Canel. The tracks extended almost to the falls so that long trains could switch back and dump their materials at the mills.

The stones are the foundation of an old railroad turntable built in 1867 and used by Morris and Essex passenger trains. Here the trains reversed direction and returned to Denville before continuing on to Morristown and New York City. Later, in the mid-1870s, the Boonton line was extended through to Montville and the turntable ceased to be used.

Continue on across the gravel parking lot to Morris Avenue. Turn left and walk up to the traffic light. Turn left at the light onto Main Street and return to your car. Take your time and explore Boonton’s little shops and businesses along your way.