Rudy was born in Boonton at 209 Mechanic Street two days before Christmas in 1922. He continued to call that address home for the next 92 years. He is the youngest (and now last surviving) of 8 siblings – 4 boys and 4 girls. Rudy’s parents, were immigrants from Naples, Italy who met and married here in America. His father was a cobbler by trade who eventually established a shoe shop in that area 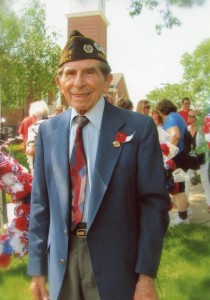 of Boonton that later would be condemned for the construction of Route 287.

With hard work and tenacity, Rudy’s family managed through the Great Depression. Following his high school graduation in 1941, Rudy’s remembers listening to the family radio while putting up Christmas decorations on December 7th and learning that his country was at war. He did not realize then just what a profound impact it would have on his life. A year later, Rudy began a journey that would bounce him around this country and finally deposit him in the South Pacific.

His mother and sisters cried as he boarded the train bound for Fort Dix. In the spring of 1943 he joined the 674th Bombardment Squadron (the “Wolf Pack”) newly formed at Will Rogers Field, Oklahoma (one of the squadrons of the 417th Bombardment Grp). Once assigned, the 674th travelled to Orlando, Florida in April where they received combat training from the Army Air Force. The first Douglas A-20 “Havocs”, light, attack bombers, arrived to equip the squadron in May. Each A-20 was typically manned by a pilot and one or two gunners. The unit then moved to Louisiana for advanced training. Once training was completed the squadron departed San Francisco by ship on New Year’s Day 1944.

The squadron arrived in New Guinea in late January 1944, where it became part of the Fifth Air Force. It began combat operations in March, flying out of a bases at Cape Sudest, Dobodura, Saidor and Noemfoor in support of ground forces on New Guinea; striking airfields, shipping, enemy troop concentrations, oil and other installations in the area. The 674th participated with other Fifth Air Force units in attacks on shipping and enemy airstrips near Hollandia in April that resulted in the destruction of 298 enemy planes. Rudy recalls that in New Guinea, the heat and humidity were so oppressive that things never dried out. You’d awake to have to put on wet clothes that had been hung to dry the night before.

Rudy served with the S-2 (Intelligence) Section. He would brief the A-20 pilots, preparing them for the day’s targeted missions against the enemy. Upon their 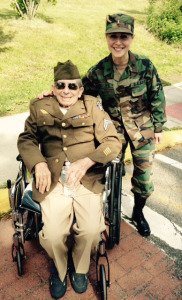 return, Rudy’s section would debrief the pilots to gain whatever information they could about the mission, enemy positions, troop movement, etc. Aerial photos were collected and analyzed (despite many photos featuring a lot coconut palms). It was a continuing process, repeated for each mission, with all manner of available intelligence interpreted and employed to enhance future mission effectiveness.

The squadron moved to the Philippines in December 1944 at the end of the New Guinea campaign. Rudy’s ground force left by ship while the aircrew flew to the newly prepared McGuire Field. While enroute, the convoy transporting the ground echelon endured and survived two harrowing Japanese air attacks.

Until June 1945 the 674th supported ground forces and continued to attack enemy airfields, shipping, transportation, and installations. The 674th’s A-20’s employed to devastating effect the practice of “skip bombing” in actions that impaired enemy shipping and supply strength and helped to clear the way for the American invasion of Luzon and the liberation of Manila and the Philippines. After the Philippines were secured, the group turned its attention to Japanese targets on Formosa in early 1945; moving to Motobu Air Field, Okinawa in August 1945 (where he remembers he had to hide inside an icebox during a major typhoon) and finally to Itami Air Base, Japan in November, where the 674th was inactivated on 15 November 1945. Rudy’s military career ended on December 27th of that year. The 674th Bombardment Squadron was awarded both the Distinguished Unit Citation (later known as the Presidential Unit Citation) and the Philippine Presidential Unit Citation for its combat service.

After the War, former Wolf Pack Corporal, Rudy Verdi returned to Boonton. He worked briefly at the Hercules high explosives plant in Kenvil, then began a 40+ year career with The Veterans Administration. During that time Rudy put himself through night school at Seton Hall where he earned a BA in Business Administration. With the VA, Rudy personally met with and interviewed returning Veterans, counselling them in the many available assistance and benefit programs offered through the VA. He also toured facilities and held meetings throughout the area in that effort to help educate and guide our Veterans on eligibility and to help processing claims. His stalwart advocacy for the Veterans of all conflicts and their survivors has helped countless Vets and their families to obtain their well-earned benefits and to better enjoy their lives. Toward the latter stage of his VA career, Rudy moved into administrative functions and by his retirement was a Personnel Director.

Rudy has been an active member of the Veterans of Foreign wars (Boonton VFW Post 242), even serving as an interim Post Commander for a period. Two of his sisters also served as Auxiliary Presidents. He has also been active in Mt. Carmel, R.C. parish, both as an usher for more than 15 years and as a choir member. Rudy was a member of Barber Shop quartets and choruses. He still loves to sing and if you encourage him, he might give you a sample of the voice he was often told in his youth could rival Sinatra. Rudy recently left his 92 year residence but still lives locally. He and his wonderful smile, sharp mind and quick wit can be found wheeling through the halls of that venerable institution where he has earned the unofficial but clearly undisputed title of the “Mayor of Merry Heart”.